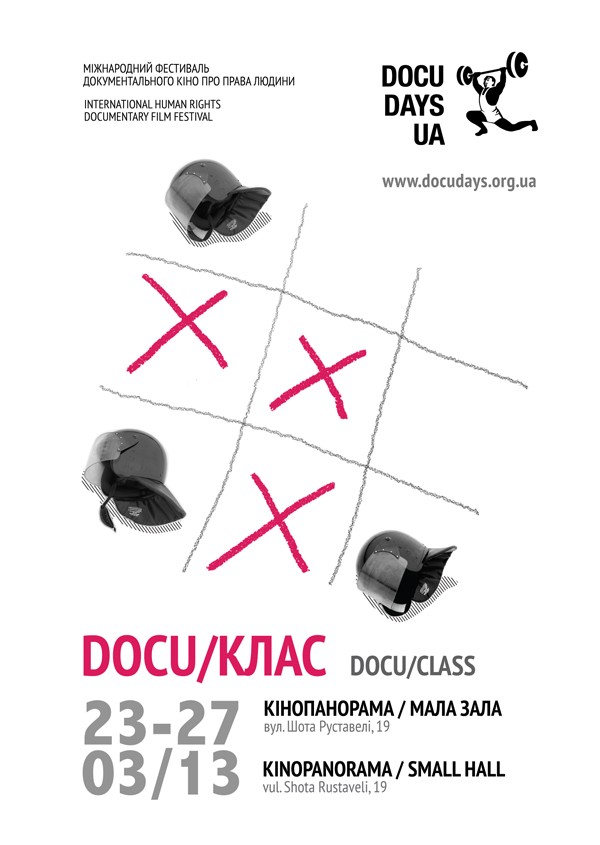 This year, nine new workshops run by prominent filmmakers, film critics and producers are waiting for you. Each of our lecturers has created a themed workshop based on their many years of experience in the field of documentary film.

Remember that the Workshops will take place every day, from March 23 to March 27 in the Small Hall of our friendly venue, the ‘Kinopanorama’ film theater. March 23, Saturday
Workshop by Roman Bondarchuk


Roman Bondarchuk is a young Ukrainian feature and documentary film director, a graduate of the film directing department of the Karpenko-Karyy National University of Theater, Film and Television in Kyiv (Yuri Illyenko’s studio); he is a permanent member of the Docudays UA Festival Selection Committee, and has won awards at many international film festivals. In his workshop, Roman Bondarchuk will share his experience on transformation of documentary film from the concept to its realization. He will turn to the way of shooting he chose for his new film, interference with reality and ‘gifts of destiny’. This workshop is based on materials from his new documentary A Poet on the Run which is now at the editing stage.

The Estonian filmmaker and producer, founder of the Baltic Film Production company, award-winner at many European film festivals, and jury member for the DOCU/SHORT program at Docudays UA, will tell workshop participants how to look for funding sources for Eastern European documentary films. The main goal of this workshop by Marianna Kaat is to show possible ways for developing a film, starting from a creative idea to its implementation, using her own film Pit No 8, shot in Ukraine, as an example. Despite various prohibitions, last year the audience of Docudays UA did get to see this film – a story of a 15-year-old boy Yura from Snizhne, in Donetsk oblast, who together with his sisters left hisalcoholic parents and had to work at illegal and dangerous mine-pits. Marianna’s film Pit No 8 has already received over 20 international awards and has aired on many TV channels in different countries.

March 24, Sunday
Changes in the schedule. Instead of Lyubov Arkus there will be the Workshop by Vitaly Manskiy

Vitaly Mansky was born in 1963 in Lvov. In the year 1982 he entered the All-Russian State Institute of Cinematography (VGIK) (S.E. Medynskiy’s workroom). His first work in the world of cinematography appeared in 1989, and since that time he has shot more than 30 films. His works were presented at more than 400 international film festivals, among which we can site forums in Cannes, San-Sebastian, Rotterdam, Berlin, Amsterdam, Moscow, Oberhausen, San-Francisco, Lokarno, Munich, Toronto, Montreal, Turin, Krakov, Rio de Janeiro, Yamagata, Lisbon and many others.  Vitaly Manskiy will devote his workshop to the topic “Documentary in Russia: Myth or Reality?”.

How to prepare a documentary film project for the European market is the name of the workshop by Krzysztof Kopczyński, the prominent Polish film director, screenwriter and producer, lecturer at the Warsaw University and expert at the Polish Film Institute. He’s prepared this lecture especially for the Kyiv audience. Kopczyński plans to talk about financing and producing films in Europe using his own works as an example, including Dybbuk, a new film project about the painful relationships between different ethnic groups in Ukraine, namely Hasidic and Orthodox Jews and Catholic Ukrainians.

One of the most highly regarded Lithuanian documentary film directors, winner of the FELIX award from the European Film Academy for the best film of 1992, and an experienced lecturer. His professional biography includes teaching documentary film at the European Film School in Denmark, as well as lecturing in Barcelona, Tokyo, Berkley, Belgrade and other cities around the world. Audrius Stonys will share his ideas on the topic of reflecting reality in documentary film. In what way does subjectivity become the main factor in creating a film image; how do reality, time and space change while passing through the prism of the author’s view? Audrius Stonys will illustrate these and other questions with fragments from his own films. Viewers will have a chance to familiarise themselves with Stonys’ best works during the retrospective of his films.

Petr Lom is an independent Czech-Canadian filmmaker and producer, and a Doctor of Political Philosophy from Harvard University, who left his academic career in order to dedicate his entire time and effort to documentary film. Among other works, he is the author of the full-length documentary film Back to the Square (2012), which is included in this year’s special Arab Spring program at Docudays UA. This film, using several people’s portraits, explains the political and historical preconditions of the revolution in Egypt. During his workshop, Lom will discuss the challenges that confront the filmmaker in the process of creating films about human rights, and the peculiarities of working in closed societies. In the second part of the workshop, he will tell his audience about the importance for him personally of a filmmaker's observation skill, and why it is so crucial to be still, patient and immobile during shooting.

Tue Steen Müller is an acknowledged expert on the world documentary scene, founder of the EDN (European Documentary Network), which he’s been heading for ten years, the curator of many famous international study programs on creative documentary film, and a jury member of the DOCU/LIFE program. Tue Steen Müller will give a lecture on festival strategies: how a filmmaker or producer can promote their film at festivals, how to choose the right festival, and what is the best way to submit an application. He will also share his advice regarding the information resources necessary for development: what and where to read, as well as where to write to, when your film project is finished.

The Russian cameraman and film director Pavel Kostomarov, who has won awards at many festivals, including the Silver Bear at Berlinale, with his workshop will start a series on web-documentaries. Last year, together with an anchorman from NTV channel, Aleksey Pivovarov, and a filmmaker Aleksandr Rastorguyev, he created the internet project The Term (Srok) – a documentary of the events that happened after the presidential election in Russia. This January, the authors started a new web-project – Reality.doc, which is a logical continuation of their film experiments I Love You, I Don’t Love You and The Term mentioned above. This time, Muscovites will be the ones filming true stories about themselves. Viewers will be able to watch online video-diaries by the characters of Reality.doc, chosen by the directors during casting, and later the project will be presented in the form of a full-length documentary. The directors think that their video will be the most accurate testimony of our times. This is what Pavel Kostomarov’s workshop will cover: Reality.doc, video-activism and web-documentaries in general.

Gol! Ukraine is a documentary web-project created by the French journalists Stéphane Siohan and Matthieu Sartre. Interactive web-films shot during the Euro-2012 football competition and presented on the websites of the French newspaper Le Monde and the TV channel ARTE demonstrate an innovative perception of football, Ukraine and its citizens. Gol! Ukraine is a unique project by a French/Ukrainian team which unites documentary film and internet technologies. The workshop by the authors of Gol! Ukraine will not only be a presentation of this specific project, but also a conversation about understanding web-documentary as it is, the opportunities it opens up, and the ways that it can change our views on documentary film. The interactive documentary film and project Gol! Ukraine will be presented by one of its authors, the French film director Stéphane Siohan.

Entrance to all workshops is free on condition of prior registration. The number of places is limited.

A detailed schedule of workshops you can find very soon in SCHEDULE.

We hope to see creative, active and goal-oriented students at the DOCU/CLASS themed workshops!