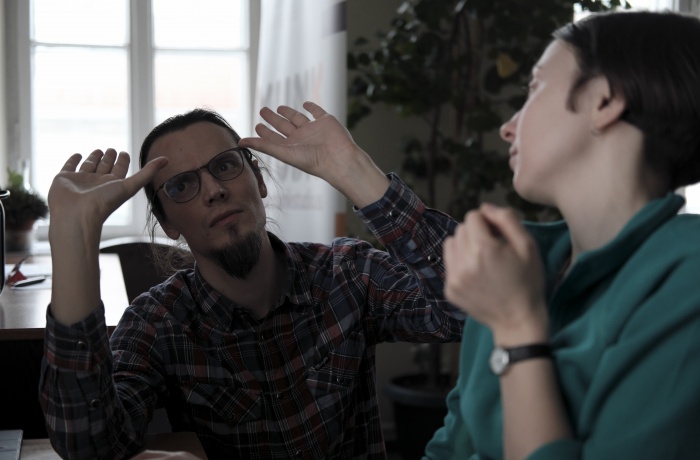 YOUNG EUROPE 2017 is an educational film project and it is aimed at young filmmakers from Poland, Ukraine, Belarus and Georgia. The main purpose is to prepare young artists to create their own, original, creative documentaries.

As before, we address young people who are about to become adults and who are asking themselves questions typical for adolescents: what is important, how to find your place in the world, what are my perspectives, what are my dreams? The choices they make are unusually dramatic – they often put a lot at stake.

We would like them to depict these problems in their films. And see that the characters in their films are presented against the background of the complex situation of today’s world. We wish for deep, personal psychological portraits of protagonists to be made. We would like the authors to reach the deep truth about mankind by touching every aspect of their lives. We trust that each of those films will be interesting, unique and original.

As in the case of the “Young People About Themselves” and “Young People About Ukraine” projects, it will end with a presentation of scripts and trailers, but this time again we will not abandon our students at this stage. We will do our best to make sure that as many of their ideas as possible are made into films presenting the image of modern Ukraine. This way our students will fulfill their professional ambitions of being present in the European media.

INSTITUTIONAL PARTNERS OF THE PROJECT

Ukrainian partners of the project:

Belarussian partners of the project:

Georgian partners of the project:

Polish partners of the project:

DOCEDU FOUNDATION is a producer of the project “Young Europe 2017” registered by Miroslaw Dembinski. Its founding was the fruit of the over twenty year rich experience of the founder, both as documentary maker and as film producer running its own company Film Studio Everest, and its long teaching careers at the Lodz Film School. Additionally he organized international film-educational workshops “The World from Dawn till Dusk 2011-2016”, Young People About Themselves 2014” and “Young People About Ukraine 2016”. Many well known Polish film makers took part in them. This includes Marcel and Pawel Lozinscy, Jacek Blawut, Jacek Petrycki, Maciej Drygas, Vita Zelakeviciute, Wojciech Staron, Rafal Listopad, Milenia Fiedler, Andrzej Musial, Andrzej Sapijja, Maria Zmarz-Koczanowicz, Maciej Cuske, Marcin Sauter. Those famous documentalists, experienced lecturers of film art In Film Schools In Lodz, Warsaw and Gdynia, they will be also the tutors of the project „Young Europe 2017”.

The partner of the project is International Documentary Film Workshop (www.idw.in.ua). It was created by non-governmental organisation The Centre for Modern Information Techniques and Visual Arts in Kyiv. This institution is also the co-founder and co- organizer of International Human Rights Documentary Film Festival Docudays UA (www.docudays.org.ua).

2016 – Ukrainian publishing of the Jacek Blawut book „Character in Documentary”